Today was an easy day. We rode 42 miles, there was a head wind but it was much slower than yesterday’s, and there were no big hills. Once in camp we were sitting around discussing tomorrow’s ride. Some other riders we met recommended that we take an alternate route tomorrow from the one that is “Adventure Cyclings”  standard route for the “Southern Tier” that we are following. The reason is that even though the alternate is 81 miles and the standard route is 71 miles it is much less hilly and curvy and much easier.  I liked the “easier” of today so should I choose to take the alternate route tomorrow because it is easier? My first thought was, “Yes”!! I like easy!! But as I began to think about it, I asked myself the question, “why did you decide to do this bicycle trip anyway?” There are numerous reasons, and one of them was ” to challenge myself by doing something hard”. Well if that is why I am on this trip why would I choose easier? OK, well I guess I will do the regular, harder route tomorrow. I will tell you in tomorrow’s blog how it was.

Each evening we pedal into camp usually between 3 and 7 pm depending on miles, hills, wind, and flat tires. The ladies usually leave in the morning around 10 am after packing everything up, and get to our next camping spot before we do and have everything all set up by the time we arrive. For Patty that means setting up our tent, blowing up air mattresses, unrolling sleeping bags, and cooking dinner on our two burner propane camping stove. When we pull in usually the first  thing I do is take a shower and get out of my sweaty biking cloths. I hang those all over my bike to air out and dry for another day of riding. We all eat dinner together and talk about the day and plan the next day. Mary Ann usually does all the calling and arranging for the next two or three days camping sites. In the evening Patty reads her Kindle and I read my IPad in our tent. She reads in her sleeping bag and I usually sit in one of our lawn chairs. We have an extension cord that we plug into the back of Richard and Mary’s camper that runs to our tent to charge everything up and to run our little electric space heater if it is cold. I read emails, the various scores, the news, Facebook, my Bible, the weather report for our area for the next day, I zoom in on Google maps and travel our next day’s route via the satellite image checking it out, I write my blog and journal entry for the day, I pray through the names of people that are on my list for the day, and I do some studying and writing on future sermons. I make a trip to the bathroom, take all needed medications, and then crawl into my warm, down filled sleeping bag. Through the evening Patty and I interrupt each others reading to talk about our day, kids, church etc. I then set  the alarm for 6 am and we go sound asleep.

That is me laying on the road dead because of the brutal day of riding with a 15 to 20 mph headwind with gusts to 30.  I am not really dead, but you knew that, I just feel like I am dead!  Steep hills have a top and then you go down, but the wind just doesn’t quit. I think it is as much psychological as physical. The seemingly never ending battle to make progress just wears you out physically and mentally. But we finally made it and arrived at a Motel that had no electricity or hot water, but they finally got some electricity but no hot water, handi-wipes tonight. There was no camping spot so we rented one room and the Camper and trailer are in the parking lot where John and Mary Anne, and Richard and Mary will sleep. Patty and I get the room with everybody using the bathroom in our room. Marjorie, our adopted tag along is going to sleep in the back seat of the pickup. We rode 60 miles today, and the weather forecast for tomorrow  is for more of the same on wind so we are going to go 50 miles, and the following day we have some super steep hills as well as wind so we are going to go 40.  We are having an awesome time😀

I don’t hate any people, I am not even a little bit irritated at anyone, but there are some things I hate, let me share a few with you. At the top of the list are rumble strips, those ruts put in the road when constructed to wake up drivers that have fallen asleep and are about to run off the road and die in a fiery crash, or those texting and about to do the same. A few seconds riding on those rumble strips on a bicycle causes great pain on an already super sore bottom, your teeth to fall out or your bike to fall apart, or all of the above. It really isn’t the rumble strips themselves that I hate, it is where the builders decided to put them. Often the space between the rumble strips and the dirt at the edge of the road is 6 inches so one little wander while attempting to ride in that 6 inches as a result of looking around at the scenery results in a dreaded few seconds getting shaken to bits or hitting the dirt and flying through the air to land with an aweful thud. The other option is to ride on the road side of the rumble strip, which I choose to do, but all the cars passing you can’t figure out why you are riding in the road when you have all that shoulder over there, and honk rudely. So far it has only been California and New Mexico that like these pains in the rear, Texas has been wide shoulders and zero rumblers. A second thing I hate is “chip seal” road surfaces that use 1 inch gravel. You know the the road surfacing system where they put hot oil on the road and then spread gravel on top of that. Small gravel is no problem, but big gravel is just a bit better than rumble strips but there is no place to get away from it. It is constant vibration up the front tire into the handle bars into my arms, neck, and shoulders. It is a little smoother where the car tires run , but I have to keep a constant eye on my mirror watching for cars or trucks coming so I can move over. The third thing that has been more of an issue for John than me so far, but I am sure it won’t be long before I have a flat caused by the wire used in steel belted tires. It is everywhere along the roads, it is stainless steel so it doesn’t rust away, it gets broken up in little bitty pieces by cars running over it, and it has an affinity for bicycle tires. It is an absolute pain. The fourth thing that I hate is head winds. I hesitate a bit to say it because God causes the wind to blow and decides where, and I don’t want to grumble against God and His sovereign choices in my life, but just as a point of frustration there isn’t much worse than looking at the profile on the map and seeing a day filled with down hill riding only to have a 10 mph head wind make the pedaling harder than going up a 6 percent grade. Almost makes you cry. That is just a few of the things I hate, but I am rejoicing always and having the time of my life😀

John has had 7 flat tires and now when he does I take a nap. Nice sunny spot next to the road and it isn’t bad for a quick nap. Takes John about 15 minutes to put a new tube in and I can get in a nice nap. Today we slept in, had a nice breakfast, walked about half a mile to a little church in town. With us there was maybe 20 adults. They had a barbecue afterwards and invited us to stay. Great hamburgers with chips, cookies, fruit, and iced tea. Tomorrow we are headed to Langtry, Texas, the town where Judge Roy Bean held court. We are going about 60 miles tomorrow. 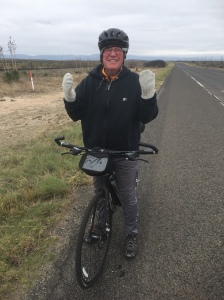 When we started riding this morning at 8:30 am it was about 35 degrees and the wind was blowing about 10 mph. It was freezing cold. I put wool socks on my hands and cut a smal hole for my thumbs to fit out so I could shift. When I had shifted I would pull my thumb back into the sock. I also wore an insulated stocking hat under my bicycle helmet, but my face got so cold I couldn’t feel anything when I touched it. It never did get warm all day long. Patty bought a little electric heater and we are sitting in our tent on lawn chairs feeling very warm. We biked 84 miles today, and we got into camp about 7 pm. This was the longest day of riding that we have had on the trip, and it is probably also the new “hardest” day as well.  We had a 10 mph head wind much of the day and a lot of uphill to travel as well. The last 30 miles was all downhill but we rarely got over 10 mph because of the headwind. What a waste of good downhill riding!  When we road into camp Patty had dinner ready and I was hungry enough to eat my bike. I had a toasted cheese sandwich and a big bowl of clam chowder with beans, peas, potatoes, and some other stuff thrown for good measure. Tomorrow we are having a res day. I am so looking forward to that. We are planning on going to church. Sanderson is a small town and the churches are very small as well. The 6 of us will really increase their attendance.

Patty and I are living in a little 4 person dome tent on our bicycle trip across the nation. Here is a picture of her bundled up in her sleeping bag reading her Kindle.